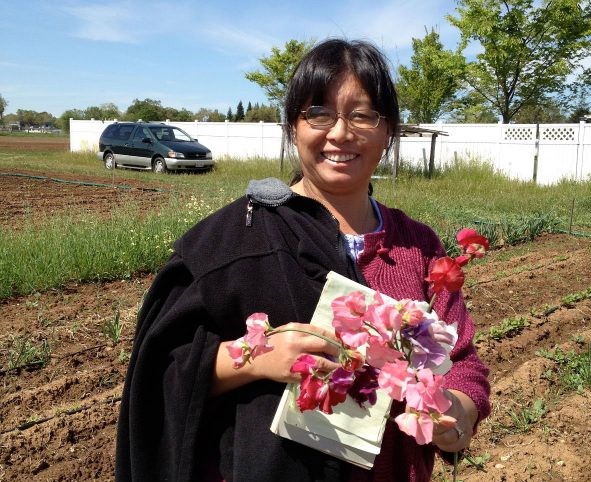 Ge Moua’s parents were farmers in Laos, and she says that farming’s “always in her blood.” From 1995-2005 she farmed flowers and vegetables near Seattle, where it was easy to find land at the time. After moving to Sacramento, she had a three-year hiatus from farming, but it called her back. “I wanted my seven children to understand farming and I thought I would regret not trying it again, while I have the strength to do it,” she said.

In California, she found a vastly different farmscape. Land was hard to find, and she felt people had little time for her as a small farmer. She found FarmLink with an online search, and regional coordinator Liya Schwartzman was ready to help: “Liya and FarmLink were my only connections to lease land.”

Over the past five years, FarmLink has helped Ge gain tenancy on three parcels, each improving upon the prior land. Currently she’s on 17 acres, with 8 acres under cultivation for 2017, growing lemongrass, mint, sweet potato, bittermelon, yam leaf, and much more. She uses a hoop house to achieve a tropical climate for some of her crops.

Ge and her husband sell at five farmers’ markets weekly: two in Sacramento, including Sundays at W & 8th, two in San Francisco, and one in Vallejo. Moua Family Farm is going strong, and along with the growing, logistics, and selling, Ge is working toward long-term land tenure. She summarized, “without FarmLink there would be so many obstacles. FarmLink is there to connect me to the right people who are willing to spend time sharing their knowledge.”