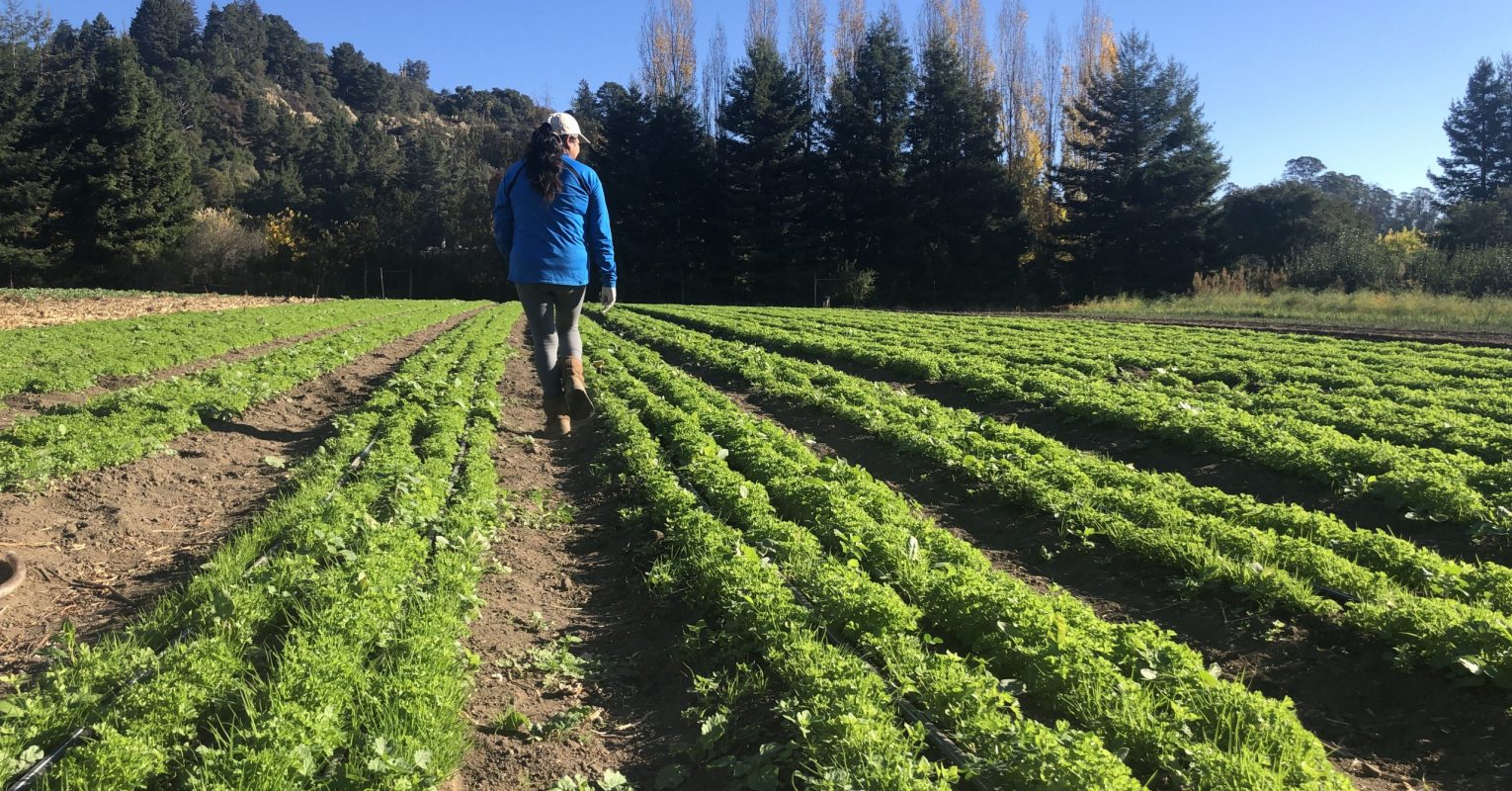 On a small plot of sunny land in Aptos, Pisga Organics wraps up its first year as an independent farm. Sofia Colin, the owner and operator, named it Pisga because the word translates to “promised land” and sounds similar to piscar, meaning, “to harvest.” The name suits Sofia’s piece of paradise; with tall pine trees and a perfectly blue, cloudless sky overhead, it is a peaceful and quiet location. The long, winding path that Sofia followed to reach her dream of being a farmer definitely seems worth it when the result is this idyllic plot where she grows her organic produce.

Sofia has loved the outdoors since she was a young girl watching her parents work in agriculture. After moving to the United States, she hoped to follow in their footsteps but could not due to allergic reactions caused by the chemicals used on most conventional farms. Rather than focus on a career she could no longer pursue, Sofia decided to work in childcare and enjoyed her role as a caretaker.

When the opportunity to join the ALBA course became a possibility for Sofia, it was her own children who pushed her to participate in the program. Like their mother, Sofia’s children are very concerned with agriculture and eating organically grown foods. “My children were a positive influence for me because they’d been trying to convince me for years to buy organic food, that we must buy it. They were young, but they already had a good grasp of what was going on,” Sofia shared. While her children do not share their parents’ passion for working outdoors, they do believe in the benefits of growing produce for personal use and as a source of income.

Sofia found the ALBA course to be difficult, but worthwhile. She already knew how to plant seeds and grow crops but the ALBA course taught her other critical skills like where to buy boxes and seeds. It also helps that Sofia loves spending her time on the land. That love of working the land also made it difficult when the time came to leave ALBA and establish her own farm.

By working with California FarmLink, Sofia was able to find a plot that suited her needs. FarmLink and our partners at Kitchen Table Advisors helped Sofia to review many different potential plots before finding the current Pisga Organics location.  When asked about her experience working with California FarmLink, Sofia replied, “They don’t just say, ‘this is how things are. If you like it, fine, if not, tough luck.’ No, they look out for you, and even say, ‘we want you to like the place, build connections with the owners, and they are always willing to help us.”

While Sofia has secured a lease where she can grow her own produce and support herself through farming, there are still challenges in her new career. The plot where she grows crops connects to expensive city water, which prevents her from growing a more water sensitive and lucrative crop like strawberries. Instead, she has to focus on crops that are not as water-intense like butternut squash and fava beans.

As Sofia discusses her current crops, she also muses about the future of her farm. Sofia’s love of her current land prevents her from leaving for the moment. “‘I’d like to have my own land – to not be moving around everywhere to have something, even if it’s small,” Sofia stated while looking over her fields at the crops ready for harvest. Behind her hangs a sign that says “The Joy of (Hard) Labor for a Labor of Love” which perfectly encapsulates Sofia’s farm and the journey she’s has taken to achieve her current success. To me, it’s also a sign that she will one day own land – the love and hard work she has put in to her operation coupled with the familial support that helped her enter farming will carry her further as she continues to develop and build Pisga Organics.  For other hopeful farmers, planning to build their own businesses, Sofia advises, “If you’re only thinking about the money, forget it. If you have love, if it’s from the heart, then do it.”

Kathryn Bailey is California Farmlink’s Farm Equity Correspondent. She guest writes for California FarmLink’s blog, focusing on farmers and landholders who have previously worked with the organization. A recent graduate of the Middlebury Institute of International Studies, her interests include sustainable agriculture, environmental justice, and equitable access to economic opportunities.