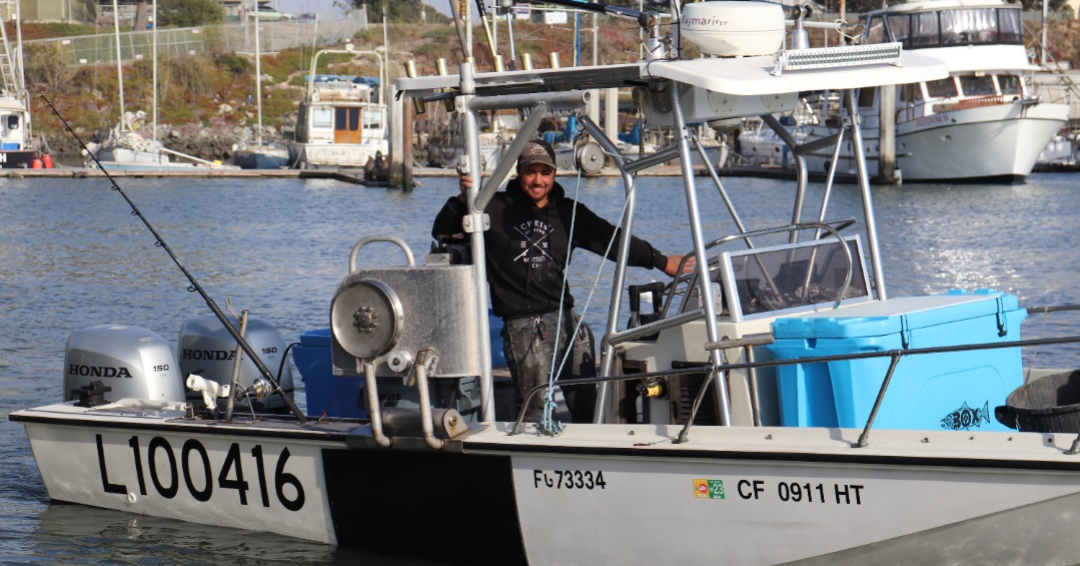 It’s a sunny late afternoon in Moss Landing, a twenty-minute drive from the California FarmLink office, and there’s a stillness around the harbor as the work day winds down. I’m meeting local fisherman Troy Stokes who graciously agreed to extend his day and share his experience receiving financing from California FarmLink and how he’s leveraged the loan to support his personal and professional goals. Only I can’t find him. I double-check the pin he sent to ensure I’m at the correct spot. Once I confirm I’m not lost, I give him a call. He promptly picks up and lets me know he just offloaded some fish on the other end of the harbor and will be right over.

I take in my surroundings while I wait. I look to my left, and a couple of deckhands are washing out bins from much earlier in the day. I look down at the water and see a group of sea lions lazily weave through empty berths to a patch of sun, and when I look up, Troy is docking his boat on the small pier next to the landing where I’m standing.

Troy grew up in the community of Seaside, California, adjacent to the historic fishing port of Monterey. When asked about his path toward becoming a fisherman, Troy reflects, “…that would start when I was a little kid. My dad always took me out fishing, and it was always just for fun. It was never for work, and it was never for money.” Since he was sixteen, Troy has worked in the local fishing industry. He began as a deckhand on commercial and charter operations and has worked his way up to captaining guided charters and occasionally helping out working on other local fishers’ boats.

Now twenty-five, Troy leads trips targeting recreational rockfish, lingcod, halibut, salmon, rock and Dungeness crabs, and more. He has built expertise across all these fisheries, including seasonality, locations, behavior, bait, and gear. He has learned how to make his own gear, lures, and traps, which he uses and sells to other fishers. He has developed relationships with many members of the local fisheries community and supply chain, including charter companies, commercial fishers, buyers, distributors, and local direct marketing opportunities such as restaurants and farmers’ markets.

iAs a result of the pandemic, Troy’s charter guiding came to an abrupt halt in 2020. He observed many local fishers expanding their reach and revenues with direct marketing and decided to launch his own commercial fishing business. He began fishing with the smaller vessel that he owned in Open Access fisheries, where a permit isn’t required, on a very small scale and selling his catch directly off the boat and to local restaurants. This was a part-time enterprise, and he continued to work as a deckhand for larger commercial fishers.

In early 2022, Troy launched his own commercial fishing business. After being referred by another local fisherman, Troy reached out to FarmLink to support the purchase of a commercial-scale fishing vessel and the acquisition of a Tier 7 permit for the Dungeness Crab fishery. The vessel is a 25’ 1985 Boston Whaler, allowing Troy to fish at an economically feasible scale. The permit will expand and diversify Troy’s catch into a higher-value fishery and help propel his business forward into the next season.

In 2021, we extended our lending program also to serve fishers. During thorough research, we found that the challenges faced by farmers and fishers are strikingly similar, such as the high cost of entry into the industry, often meager profit margins, and complex regulations. FarmLink is in a unique position to support fishers since we’re already familiar with navigating the complexities of California agriculture. Serving small-scale fishers with the same capital access and business technical assistance we’ve provided to small-scale farmers is a vital part of our work supporting healthy and resilient food systems across the state.

Moving forward, one of the biggest goals Troy has as a sole proprietor is to be self-sufficient financially and buy a house in the community he has always called home. He is also participating in the next Resilerator course starting in November. Since receiving financing from FarmLink, he is already sharing his experience with his peers, “I’ve told other people already, ‘Go ahead and do it [apply for a loan]’ I mean, it’s a great thing. It makes you think about what you need to do to succeed.”